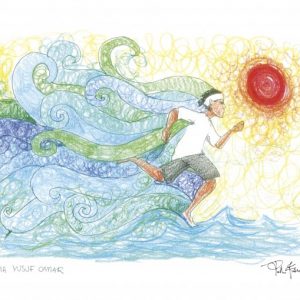 Only God knows the names of all the people who have sought the relative safety of Lampedusa’s shores. But we know the name of the woman in this picture. It is Samia Usuf Omar. She was a sprinter for Somalia in the 2008 Beijing Olympics. When she returned to Somalia after competing in the Olympics, she found herself in an increasingly dangerous and restrictive situation. So, in October of 2010 she began the journey she hoped would take her to Europe, a new coach, and a chance at the 2012 Olympics.  In October of 2012 her overcrowded boat ran out of gas. She drowned within sight of the rescue boat. The only reason we know about her is because another Samali athlete, gold medalist Abdi Bile, told her story.

Ruth was a refugee. She fled famine with her mother-in-law, Naomi, and struggled to find acceptance in Naomi’s home town of Bethlehem. As a foreigner, a widow, and a recent convert to her mother-in-law’s faith, Ruth exists on the margins of the community of which she longs to become a part.  In this passage from the end of the book that bears her name, we see the community finally returning her embrace. Instead of “Ruth, the Moabite,” she is here named with the matriarchs, Rachel and Leah. In the genealogies that follow, we realize that she is the great-grandmother of King David.

Ruth’s story reminds us that “foreigners” have had a crucial role to play in God’s story of salvation. It prompts us to remember that every refugee has a name and a story that is known to God even if it is not known to us. It makes us wonder about how the gifts and hopes of those who have died might have changed our world for the better. Finally, it nudges us to open our hearts, our minds, and our homes to people who we perceive to be different from ourselves.

Prayer: Gracious God, to you all your children by name. We lift before you all the people who risk their lives to find safety on distant shores. Even if they are anonymous to us, they are known and loved by you. We pray, especially, that Samia’s story may inspire others. May it help us to revise our assumptions and check our stereotypes. Comfort all those who grieve for those the world has forgotten, but whose love and legacy will always be a part of those they have left behind.