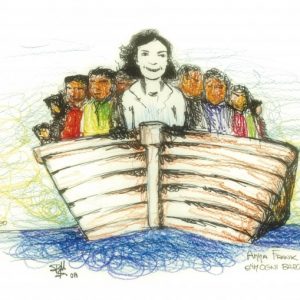 Story: If the face in the prow of the boat looks familiar, it’s because it is that of Anne Frank. Most of us know her story. Though she died of typhus in the Bergen-Belsen concentration camp in 1945, Anne’s words live on in a book that has since been translated into over sixty languages: The Diary of a Young Girl. Penned during the years she and her family were in hiding from the Nazis (1942-1944), Anne’s diary gives us a tender and terrifying glimpse into the soul of a young woman who ached to live in a world free of hate, persecution, and war.

What many do not know is that Anne’s father, Otto, tried desperately to get his family out of the Netherlands. His efforts were thwarted in part by the restrictive immigration policies of the United States. Anne is portrayed with a smile in this drawing, but perhaps the artist, Francesco Piobbichi, is inviting us to imagine Anne finally making her escape with others who share her hopes and dreams of a life free from hate, persecution, and war. He may also be nudging us into asking ourselves an uncomfortable question: If we care so much about Anne Frank, why don’t we care more about the lives of the other people in the boat?

This passage from Hebrews urges us to “show mutual love.” It’s another way of stating Jesus’ golden rule: “do to others as you would have them do to you” (Luke 6:31). Of course, this requires both imagination and empathy—both of which seem to be in short supply sometimes. Still, if we could manage to drum up even a little bit of both, we might find it easier—and more urgent—to open our hearts and wallets to refugees. “What if I were on one of those rickety boats, trying to make my way across the Mediterranean?” we might ask. “What if I had given everything I had to purchase my passage from unscrupulous traffickers? What if I had been raped and tortured in a Libyan prison?”

If that were not sufficient motivation, the book of Hebrews points out another possibility. “Do not neglect to show hospitality to strangers,” it says, “for by doing that some have entertained angels without knowing it.”

When we read The Diary of Anne Frank we say to ourselves, “If only I had been there I would have tried to help her!” There is no way to know, of course, if we really would have tried. But there is a way to find out if we’re willing to help the real and present refugees that, like Anne Frank, are trying to find their way to freedom. Who knows if, in helping one of them, we might be aiding another Anne?

Prayer: Forgive us, O God, for caring selectively. Forgive us for turning away from people who may not look like us, or speak like us, or worship like us. Fire our imagination; fuel our empathy. Then guide us to ways we can make a difference.