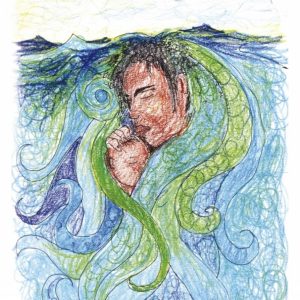 This image of a mother cradling her baby is heartbreakingly lovely—or at least it is until we realize that they are under the waves. Then it is just heartbreaking.

The tragedy that took their lives and the lives of at least 366 others took place just off the shores of the island of Lampedusa in the Mediterranean Sea on October 3, 2013. Over 500 people were crammed onto the rickety boat that caught fire and capsized that night. They were trying to escape war and poverty in places like Eritrea and Somalia.

We don’t know the names of the woman and child in Francesco Piobbichi’s picture. But he drew the picture so that we would not forget their story. Here is how he describes it in words:

On a moonless night, a boat with hundreds of passengers sank just off the coast of

Lampedusa. They asked for help but in vain. Hundreds of people perished at sea.

or smelled the sweet smell of land. The present sank without giving possibility for the

“A voice is heard in Ramah,” the prophet Jeremiah writes. It is a voice of “lamentation and bitter weeping.” The matriarch, Rachel, is “weeping for her children” who have been killed or driven into exile. She “refuses to be comforted for her children, because they are no more” (Jer. 31:15).

Although the circumstances of our contemporary exiles are not precisely the same, it is hard not to hear mother Rachel weeping still. What else can one do but weep?

Believe it or not, some seek to blame the victims. “Why would a woman in the last stages of pregnancy try to cross the Mediterranean in a crowded boat? Why would she leave home in the first place?” they ask. These questions are ignorant of the desperation that drives migrants to leave their homes in the first place. They also overlook the fact that many women are raped along the way, and held for months in brutal Libyan “detention centers.”

Rachel is right. Weeping is the appropriate response. But it is not the only response. In a radio broadcast commemorating the anniversary of the October 3 event, Paolo Naso, the coordinator of Mediterranean Hope suggested that–

who have been fleeing war, persecution, hunger, and violence.

Weeping is natural. Blaming is inappropriate. But working for change is imperative.

Prayer: Forgive us when we are tempted to look away from problems that seem too big to fix. Help us to find real ways to help. And lest we pray only for ourselves when the suffering of others is so great—stretch out your hands to comfort, to heal, and to save.