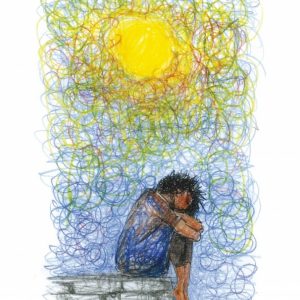 From the moment this young mother was pulled from the waters of the Mediterranean, she was desperate to find her young daughter. “Mia bambina!” she cried, over and over. “My daughter! My daughter!”  She clung to the hope that her little girl would be found alive. It was as if hope itself were her lifeboat. Even after she had been transferred to a refugee center in Catania, Sicily, she continued to ask for her daughter. Eventually, the aid workers confirmed that the little girl had fallen into the water and drowned. In that moment, Francesco Piobbichi writes, it was as if “the sun became cold.” Silence fell over them and there were “no more words.”

In that moment, David was not responding as a king, but as a father. It didn’t seem to matter to him that Absalom had betrayed him, or that his own reaction was perceived as the height of ingratitude by his war-weary troops (see 19:1-8). Until the evidence was incontrovertible, he had continued to hope. The first words out of his mouth when the messenger came with the news were, “Is it well with the young man Absalom?”

When I look as Francesco Piobbichi’s drawing of the young mother hoping against hope that her daughter will be found alive, I do not see a refugee. I see a mother. And for me, the sun becomes cold, and there are no more words.

Prayer: We know that you are a God who sees our misery and hears our cries. Hear the cries of all whose hearts are broken. Soften the hearts of those who have it within their power to alleviate suffering. Amen