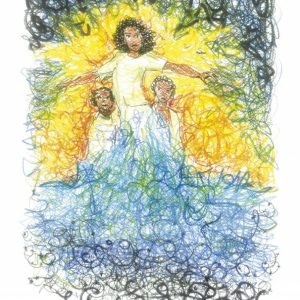 When I visited the island of Lampedusa in 2018, artist Francesco Piobbichi took me to a sun-drenched cemetery where we visited the grave of the young woman at the center of this picture. Her name was Welela. Here is her story in Francesco’s own words:

Welela was in prison in Libya when a gas cylinder exploded and burned her body.

She was not treated but loaded onto a dinghy. I think of her burned skin with the salt

of the sea and the pain that she could have felt and none would [ever] tell. I think of

her friends singing to say goodbye to her. Welela stared at Europe and at our European

rulers from a dinghy of fire over this sea of barbed wire. Welela will give us her eternal

From Drawings from the Border (Claudiana, p. 22)

Paul encouraged the Galatian Christians to “not grow weary in doing what is right.” For the people who work on the front lines of the refugee crisis, this is easier said than done.

I wanted to let you hear Welela’s story in Francesco’s own words because, in the telling, his pain is so intertwined with her own. Just as the salt-water must have seared Welela’s wounds, so memories of tragedy sear the souls of the rescue workers. How can one not grow weary? How can one not be angry?

For Francesco, the drawings are a way to “harness that anger” without forgetting what made him angry in the first place. As he puts it, “Drawing means getting inside yourself to narrate what is happening inside you: A picture…becomes a key to open the door of a tale that crosses borders” (Drawings from the Border, p. vi). Perhaps it is also a key to not growing weary in doing what is right. 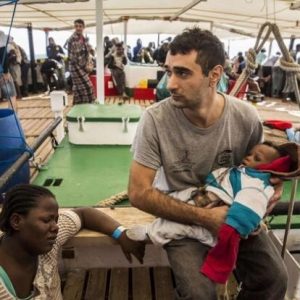 Prayer: Help those who help, O Lord. May they draw from the inexhaustible well of your compassion, so that they may not grow weary of well-doing.