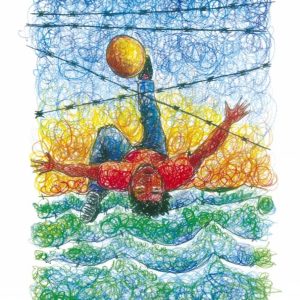 At first glance we see only the boy with the ball. He could be the kid down the block. We smile at his exuberance. We marvel at his skill. We worry for his safety, since he seems more intent on scoring a goal than on landing well.

It is not a game at all. This is a heroic attempt to break free from oppression, poverty, and war. This is a beautiful child who is willing to risk everything for a new life. The barbed wire is the border that binds his future and scars his soul.

Maybe that’s why Francesco Piobbichi calls this drawing, “Kick the Fear.” Here is what he says about his drawings in general:

My drawings are conceived and end in a matter of minutes [using] vivid colors that give hope mixed with the pain they recount. The colors, scrawled onto the page, swirl as in the vortex of a storm; they almost tear the paper on which they are drawn. My drawings reveal the hatred that surrounds the migrants and the barbed wire that sticks in their skin, barriers so oppressive that the migrants will always live with it wherever they go. My drawings are an act of love for humanity—I would consider them emblems of justice and freedom (Drawings from the Border, p. vi).

The “Suffering Servant” of Isaiah’s prophecy announces good news to the people imprisoned in Babylon:

The spirit of the Lord God is upon me, because the Lord has anointed me;  he has sent me to bring good news to the oppressed, to bind up the brokenhearted,  to proclaim liberty to the captives, and release to the prisoners.

The messenger may have been new, but the message was not. This was the theme-song of the exodus, after all. And if we trace the trajectory into the New Testament, we can hear the Suffering Servant singing the same song there. Our God is a god who liberates captives and binds up the broken-hearted. Second verse, same as the first.

Once we learn the melody of God’s theme-song we begin to recognize it in all sorts of places. One of the places I hear it is in these stories from the border. It makes me want to join God in that liberating song.

Prayer: We, created in your image, would a true reflection be of your justice, grace, and mercy and the truth that makes us free.