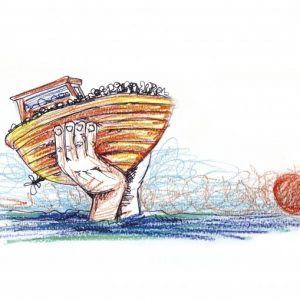 At the height of the Mediterranean refugee crisis in late 2015, an ecumenical group of Italian Christians banded together to establish Humanitarian Corridors. Since that time, over 1500 refugees have been given safe and legal access to new lives in a new country.  Priority is given to victims of persecution, torture, and violence, families with children, and people with illnesses or other disabilities. Similar efforts have also begun in France and Belgium, and at this writing (June 2019) there is reason to hope that another 50,000 people may be allowed into European host countries through similar “corridors.”

The drawing above has become the symbol of Humanitarian Corridors. The artist (or as he prefers to be called, “social cartoonist,”) is Francesco Piobbichi. Working on the front lines of the crisis, Piobbichi asks what, to him, is the obvious question: “How could we be indifferent to this pain? In front of all those coffins, we said we wanted to change things. That’s why we had to create “humanitarian corridors” (Drawings from the Border, p. 56).

Pelted with a litany false accusations by his so-called friends, Job responds with a list of his own. In that list, he names acts of kindness and justice that reflect the kind of person he truly is. “If I am guilty of anything,” he essentially says, “find me guilty of these things.”

Part of his manifesto includes the words:

I was a father to the needy, and I championed the cause of the stranger.

I broke the fangs of the unrighteous, and made them drop their prey from their teeth.

For refugees awaiting safe passage from torture, war, and despair, such words must seem as distant as the far side of the Mediterranean. Yet, they reflect the compassion and courage that created Humanitarian Corridors. They reflect the heart of all those who ask, “How can we be indifferent to their pain?” 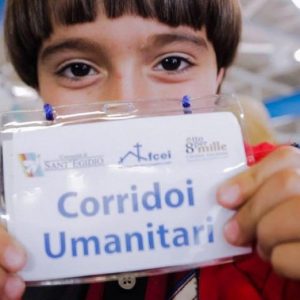 Prayer: Save me from the soothing sin of the empty cultic deed

and the pious, babbling din of the claimed but unlived creed.

Let my actions, Lord, express what my tongue and lips profess.