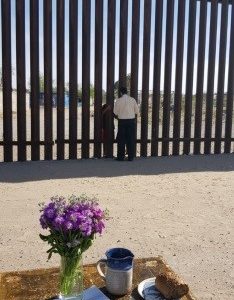 But the seventh day is a sabbath to the LORD your God; you shall not do any work—you, or your son or your daughter, or your male or female slave, or your ox or you donkey, or any of your livestock, or the resident alien in your towns…. (Deuteronomy 5:14 NRSV).

Look closely at the picture reproduced above. The scene in the foreground is familiar. The table may be a bit less formal than the ones that typically grace the front of our sanctuaries, but the bread and the wine are a giveaway. This is the Lord’s Table. All things are ready.

Now focus on the scene in the background. The man in the white shirt on the near side of the fence is an Uruguayan pastor named Dario Barolin.[1] He was visiting the US/Mexican border with a group of Latin American Christians concerned about the treatment of refugees. Just as he was about to begin distributing the communion elements to those in his group, he realized that there was someone participating in the service from the southern side of the border fence. So he did what any self-respecting pastor would have done. It was the Lord’s Table, after all, and he was certain that Jesus would not have let a border fence get in his way. So Dario served communion to his brother on the other side of the fence.

Some things just ought to be obvious.

The logic of justice and hospitality prevails in a similar way in both versions of the Bible’s Sabbath commandment. Sabbath rest is not something granted exclusively to the covenant people. Both versions of the Ten Commandments make it clear that Sabbath rest should be extended to children, livestock, slaves, and resident aliens. There is something in the very nature of Sabbath, evidently, that demands it be shared.

Both versions of the Ten Commandments devote more real estate to the Sabbath than any other commandment, and both agree on the necessity of extending Sabbath privileges to all. The reasons given for Sabbath observance are different, however, and that difference is instructive.

In Exodus 20:11 it is all about imitatio Dei: God worked for six days and rested on the seventh, so we should, too. In Deuteronomy 5:15, however, the rationale is a pointed reminder of the covenant people’s past. “Remember that you were a slave in the land of Egypt, and the LORD your God brought you out from there with a mighty hand and an outstretched arm; therefore the LORD your God commanded you to keep the sabbath day.”

One wonders if Moses thought the people needed that reminder. Had people gotten into the habit of putting up their own feet on the Sabbath while asking those with fewer privileges and power to keep working? Perhaps in the time it had taken them to move from Sinai to the promised land the memories of slavery had faded. Maybe some people were starting to savor whatever scraps of power they could claim over those with fewer options.

There is no way to know, of course. But we do know that Moses’ reminder says something important about Sabbath. Sabbath is not about entitlement. Its essence is both generous and just.

One has to wonder if this reminder was enough to make those ancient Israelites uncomfortable, not just with their lack of Sabbath generosity, but about the fact that they owned slaves at all. But perhaps we should worry less about the ancient context than the modern one. If we decide to accept the gift of the Sabbath, should we not also commit ourselves to generosity and justice?

Some things just ought to be obvious.

Prayer: We are grateful for the gift of your grace, both at the Lord’s Table and the Sabbath table. Show us how to be more generous and just, especially to the strangers within our gates.

[1] The Rev. Dr. Dario Barolin is pastor in the Waldensian Church of Rio de la Plata and serves as the Executive Secretary of the Alliance of Presbyterian and Reformed Churches of Latin America.