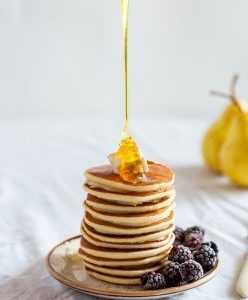 The house of Israel called it manna; it was like coriander seed, white, and the taste of it was like wafers made with honey (Exodus 16:31, NRSV).

Did you grow up being lulled to sleep with lullabies like this one?

And if that mocking bird don’t sing,
Mama’s going to buy you a diamond ring.

And if that diamond ring is brass,
Mama’s going to buy you a looking glass….

The lullaby goes on to promise prizes that reflect other “hot items” of the song’s era: a billy goat, a horse and cart, and even a dog named Rover.

I confess that I like this lullaby. I sang it to my children and I continue to sing it to my grandchildren. (Although I sometimes wonder when they will wake up and point out that they would much rather have an iPhone than a billy goat.) But as I sing it, I also wonder if I may be inadvertently encouraging little consumers. While we can’t blame everything about our consumeristic culture on an old lullaby, could it be symptomatic of the insatiable aspect of both our culture and our human nature? Have we been guzzling consumerism along with our mother’s milk?

The “manna” story, with its emphasis on not gathering on the Sabbath, is a perfect parable for those of us who feel like we never have enough.

Soon after their escape from slavery in Egypt, the people of God face a test that will reveal whether or not they truly trust God to care of them in the wilderness. Moses relays the instructions directly from God. Each morning, God will rain down “bread from heaven” in the form on mysterious but tasty “manna.” They are to gather only enough for each day, and twice as much on the sixth day, so that they will have enough for the Sabbath on the seventh day.

But of course, people being people, they disregard God’s instructions and gather more than they need. This does not work well. The hoarded portions quickly develop worms—except on the sixth day, when the manna’s shelf-life is miraculously extended to cover their needs for the Sabbath day.

It’s easy to get distracted by the miraculous characteristics of “manna” when we read this story. We, like the Israelites, can’t get past “What is it?” But obsessing over the characteristics of the manna may distract us from the true miracle of this story: those people who are able to recognize when they have enough.

The ancient Greeks had a similar cautionary tale about a man named Erysichthon. When he cut down one of the goddess Demeter’s sacred oaks, she cursed him with insatiable hunger. After devouring everything (and everyone) around him, he finally served up himself for dessert.

I think of Erisichthon every time I see my favorite bumper sticker, which reads: INSATIABLE IS NOT SUSTAINABLE.

Drop Thy still dews of quietness, ‘til all our strivings cease;

Take from our souls the strain and stress,

and let our ordered lives confess the beauty of Thy peace.