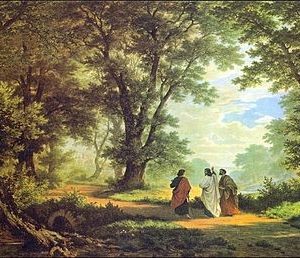 “The Road to Emmaus”

As they came near the village to which they were going, he walked ahead as if he were going on. But they urged him strongly, saying, “Stay with us, because it is almost evening and the day is now nearly over.” So he went in to stay with them. (Luke 24: 28-29, NRSV)

If I am honest, part of this painting’s appeal is that it reminds me of the place where I grew up. The only problem is that I grew up in a valley in north-west Illinois, and the road to Emmaus is a few miles north-west of Jerusalem. Last time I looked, the two places had little in common.

Once we get past the trees, however, things get more interesting and—one suspects—more accurate.

The body language of the three figures suggests that this is a scene from the middle of the story. The men on either side of Jesus seem to be hanging on his every word. Their posture is eager and alert. This must be the part where Jesus interprets to them “the things about himself in all the scriptures” (v. 27).

Of course, they don’t realize yet that this mysterious stranger is Jesus.

Who could blame them? Even if their eyes hadn’t been “kept from recognizing him” (v. 16), their hearts and their heads would surely have gotten in the way. This was three days after Jesus’ crucifixion, after all. When Jesus asks them what they are talking about, they stop in their tracks and respond incredulously, “Are you the only stranger in Jerusalem who does not know the things that have taken place there in these days?” (v. 18).

But first impressions are deceiving. This stranger does not turn out to be as clueless as they thought. Before long, they are the ones who feel clueless. They can’t get enough of what he is saying. It might not make sense, but it’s a vast improvement over their previous despair. So, when they reach their destination, and it looks like Jesus intends to continue down the road without them, they plead with him. “Stay with us,” they urge, “because it is almost evening and the day is now nearly over.”

While this may be true, one suspects that their own curiosity was as much a motivator as their concern. And was there also a spark of hope—struck by the stranger’s oddly encouraging words? If so, it was nothing they could articulate yet. Only a gut feeling that they couldn’t let this man walk down the road without them.

Jesus accepts their invitation. The rest of the story relates the moment when the men finally recognize Jesus. It is surely significant that “their eyes were opened” when they were at the table. Maybe it was the way Jesus blessed and broke the bread. One can almost feel the wave of déjà vu as they heard the familiar words spoken by the beloved voice. By the time they reached out to receive the broken bread from his hands, they knew.

This gorgeous setting of Luke 24:29 interprets the plea for Jesus to “stay with us.” The composer, Josef Gabriel Rheinberger, write the first version of the piece in 1855 when he was only 15. This recording, conducted by Klaus Breuninger, was made in Stuttgart, Germany in 2007. It features 100 singers from over 40 nations.