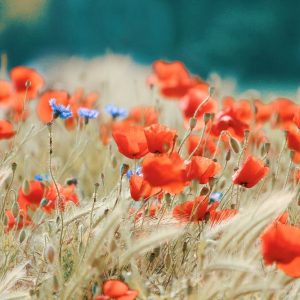 We continue the “Tuned for Praise” series with three hymns on healing.

This is the third of those three reflections.

Contrary to popular belief, the book of Job does not have a happy ending.

Oh, I know that Job ends up with twice as much stuff as he had before and a whole new set of children. But are we meant to believe that life was ever really the same for him after his 42-chapter ordeal?

My young daughter, Ellen, made me feel the sharp end of this point once. I had just finished reading the ending to book of Job to her and her brother, Andy. Afterwards, she sat very still for a moment. Then she asked, “Mom, if Andy and I died and you and Dad got NEW kids—would that make it OK?”

Her question sent me back to the end of Job’s story with some questions of my own:

Though we can’t ask Job directly, there are certain clues to how he might respond to these questions in the details of the text itself. He prays for his so-called friends. He throws a big party and gives gifts to his siblings—even though they had been noticeably absent during his ordeal. He gives frivolous names to his new daughters (Dove, Cinnamon, and Eye-Shadow)—and then flaunts all convention by naming them in the will along with their brothers.

I like to imagine Job singing the hymn, “O God Beyond All Praising.” I picture him singing with his head thrown back and a smile on his face. The references to Christ in verse two would puzzle him, but if we told him the story, it probably wouldn’t surprise him to learn the lengths to which God was willing to go to make things right. And when he got to verse three there might be tears on his cheeks, but he’d sing all the louder. Because who would know better than Job that “whether our tomorrows be filled with good or ill, we’ll triumph through our sorrows and rise to bless you still”?

Listen:  O God Beyond All Praising– This hymn text by Michael Perry is here set to the tune THAXTED by Gustav Holst. You may recognize this tune as the triumphant theme of the Jupiter movement from his suite, The Planets. This arrangement for choir and orchestra is by Richard Proulx and is available from GIA Publications.

Pray: “Whether our tomorrows be filled with good or ill, we’ll triumph through our sorrows and rise to bless you still.” Thy will be done.

From v. 3 of Michael Perry’s “O God Beyond All Praising.”