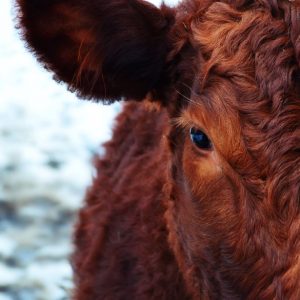 And she gave birth to her firstborn son and wrapped him in bands of cloth, and laid him in a manger, because there was no place for them in the inn (Luke 2:7, NRSV).

We’ve known since we were kids that the little Lord Jesus was asleep on the hay. And we have it on the same good authority that when the cattle started lowing, Jesus didn’t even cry.

What’s “lowing”? Why do we assume baby Jesus didn’t cry? For that matter, why do we assume there were animals present? Look closely. Luke doesn’t say a word about animals. He mentions a manger. (For non-farm folks, that’s a box for holding animal food.) Ah—so we infer the presence of animals based on the reference to the manger.

I grew up on a farm. Since the barn was one of my favorite places, I always thought Jesus showed exceptionally good sense being born in one. But I was worried about that manger thing. After all, if a cow or a donkey was used to eating out of that manger, what if they took a bite out of the baby by mistake? My mother assured me that Mary and Joseph must have made sure the animals kept their distance. “But wouldn’t the animals be mad?” I wondered. Clearly, Jesus would have to be careful. Barns were great, but even I knew you had to watch yourself.

The mere mention of a manger may be weak evidence for our elaborate nativity scenes. Still, the instinct for including the animals is a good one. They are, after all, part of the creation that Christ came to redeem. And if we take the incarnation seriously, why shouldn’t they be among the first to witness the Savior’s birth?

It turns out that the only danger in our “animal enhanced” nativity scenes may not be from the animals themselves. Rather, it stems from our own tendency to romanticize the scene. Why is that we assume that any Bible story that features animals is automatically a children’s story? (Think hard about Noah’s ark. Is there anything remotely appropriate for children in that story?) Why is it that we assume the baby Jesus didn’t cry—or have a dirty diaper for that matter? If we’re going to believe in the incarnation, let’s embrace it—not sanitize it.

As we move toward the manger this Advent, let’s stop and smell the manure. Let’s allow the baby Jesus cry for a while, for heaven’s sake. And don’t just send the kids into the manger in their shepherd costumes. Crowd in there with them. It’s a story for all of us.

Besides. Who else is going to make sure the cow doesn’t take a bite out of the baby?

Listen:  O Magnum Mysterium – This anthem by Morten Lauridsen reflects on the “great mystery” of the incarnation—animals and all. This recording is by the Nordic Chamber Choir.

Translation: O great mystery and wonderful sacrament, that beasts should see the new-born Lord lying in a manger. O blessed virgin, whose body was worthy to bear the Lord Jesus Christ. Alleluia!

Prayer: Renew our sense of wonder, O God, that “he came down to earth from heaven who is God and Lord of all; and his shelter was a stable, and his cradle was a stall.”