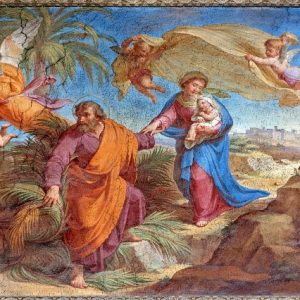 Then Joseph got up, took the child and his mother by night, and went to Egypt (Matthew 2:14, NRSV).

A refugee is typically understood to be “a person who has been forced to leave their country in order to escape war, persecution, or natural disaster.”

The gospel of Matthew makes it crystal clear that Jesus and his parents were refugees. In this, alas, they were not and are not unusual. According to the UN Refugee Agency (UNHCR) there are currently 25.9 million refugees—the highest number ever seen. And this doesn’t even count the 41.3 million “internally displaced” individuals, or the 3.5 million “asylum-seekers” (UN Refugee Statistics). That the danger was real for Jesus and his family is borne out by Herod’s slaughter of the innocents (Mt. 2:16).

There are unusual features to the holy family’s story, of course. Joseph learns of the danger when he is tipped off in a dream by an angel. And Matthew goes out of his way to point out that this whole episode fulfills something the prophet Hosea once said (Hosea 11:1). But we shouldn’t let the extraordinary features of this story eclipse its brutally ordinary basics. Jesus and his family fled for their lives, and in doing so, they made common cause with millions of people, past and present.

So, why did presidential candidate, Pete Buttigieg, catch flack from religious conservatives when he referred to Jesus as a refugee? His Christmas tweet was straightforward:

Today I join millions around the world in celebrating the arrival of divinity on earth, who

came into this world not in riches but in poverty, not as a citizen but as a refugee.

No matter where or how we celebrate, merry Christmas.

Yet, this response by JD Rucker was typical of the push-back Buttigieg received from the Twitter-sphere:

Jesus was not born into suffering. His earthly family was neither poor nor refugees. His story

is not a metaphor to push open borders policies here and around the world. It’s a guide for life

and death, a message of hope beyond this world.

I will leave it to others to analyze all the aspects of this Christmas kerfuffle. But as we begin a new series called “Faithful Foreigners,” it seems important to point out a couple of things this story brings to the surface.

First, why are we so worried about stating the obvious? Jesus and his family were refugees. Are we so xenophobic that we cannot even contemplate the fact that Jesus had something in common with “those people?” Or perhaps it’s our discomfort with a vulnerable Savior. If that’s the case, then the cross is going to present a problem. In any case, my colleague Suzanne McDonald observed that, “If you can’t accept that they were refugees, then you have a political issue that has become a gospel problem.”

The second thing that’s worth saying is this idea that Jesus’ story is “a guide for life and death, a message of hope beyond this world.” Yes and no. Of course Jesus’ story has life and death implications. But if we think it is only—or even mostly—about the next world, then “it’s time we rubbed our eyes and read our texts again” (NT Wright in Surprised by Hope).

Pray: For all the ways we fail to see you in the faces of “those people,” dear Lord, forgive us.