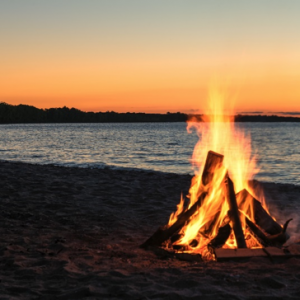 After we had reached safety, we then learned that the island was called Malta. The natives showed us unusual kindness. Since it had begun to rain and was cold, they kindled a fire and welcomed all of us around it” (Acts 28:1-2).

The kindness of strangers. The phrase is so familiar that we often undervalue the reality it reflects. We’re less likely to take it for granted, however, when we are the one whose life depends on it.

Perhaps that is why this story caught my attention. My husband and I are spending some time in Italy, and we have had plenty of opportunities to be grateful for the kindness of strangers. (I would give examples, but I don’t want to worry my mother.) Or maybe it’s because I have heard two sermons in one week on this passage from Acts. It’s a riveting story that features storms, shipwrecks, and the general perils of Paul. Mostly what it’s about, however, is the mercy of God made manifest in the kindness of strangers.

If you read the story, you will realize quite quickly that not all of the strangers are kind. The sailors are down-right duplicitous. First, they try to abandon ship, and then they scheme to kill the prisoners. But their evil intentions are kept in check by a sympathetic centurion named Julius who seems to take something of shine to Paul over the course of the voyage. Perhaps he is impressed that all of Paul’s predictions keep coming true. In any case, he uses his authority to shield Paul, and his good sense to get everyone safely ashore when the ship starks breaking up (27:43-44).

Both of the sermons I heard on this passage zeroed in on the phrase “unusual kindness.” It’s the way the Bible describes the welcome that the natives of Malta give to Paul and the other victims of the shipwreck. “The natives showed us unusual kindness,” the narrator writes. “Since it had begun to rain and was cold, they kindled a fire and welcomed all of us around it” (28:2).

It’s clear that the narrator is under no illusions about this welcoming committee. They seem to be a superstitious lot. First they assume Paul is a murderer and then they declare him a god. But whatever their faults, they are the only ones in the story who don’t seem to notice (or care) about the rigid power structure that has defined the passengers up to this point. Once the sailors, the soldiers, and the prisoners wash up on shore, the natives of Malta simply treat them as fellow human beings—human beings whose lives depend on the kindness of strangers.

Both of the sermons I heard were in the context of services celebrating the Week of Prayers for Christian Unity. To say that these were celebrations is perhaps a bit premature, since Christians have not been especially successful at manifesting unity—in this or in any other century. We mostly manifest things that don’t much call for celebration. So, we pray for a unity that—even on a good day—exists only in part.

But perhaps that’s why both preachers—Monsignor Juan Usma Gomez and Pope Francis—decided to stress this notion of “unusual kindness.” Would that it were not so unusual for Christians to be kind to one another and to others. Maybe that’s why the witness of these “faithful foreigners” from Malta is so powerful. What might the church look like—what might the world look like—if we could see beyond the power structures and labels we impose on each other? What would happen if we saw each other as human beings—children of God is need of unusual kindness?

Ponder: When have you experienced unusual kindness? How did it/does it shape the way you see the world?

Pray: Kind and merciful God, may others see your kindness and mercy in all we do and say. Forgive us for making the world a place where kindness is unusual.