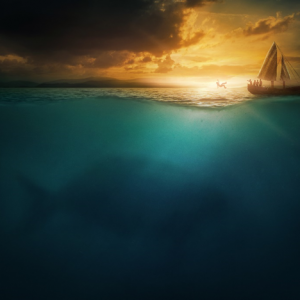 But the LORD provided a large fish to swallow up Jonah; and Jonah was in the belly of the fish three days and three nights…Then the LORD spoke to the fish, and it spewed Jonah out upon the dry land. (Jonah 1:17 & 2:10).

It is probably safe to say that, for most of us, getting swallowed by a big fish would not be a good thing.

For Jonah, however, it was a good thing. A very good thing. Granted, it may not have been pleasant. And scrambling up onto the beach drenched in fish vomit had to be pretty undignified. But since it was that or drowning, I think one can argue he came out ahead.

The late Howard Hageman once began a lecture on the book of Jonah with the following disclaimer: “I am not going to talk about either the credibility of the story or the edibility of the prophet.”

Hageman’s instincts were spot on. Most of us get so distracted by the “incredulity quotient” in this story that we miss its most important points. So, for the duration of this reflection, I invite you to suspend disbelief and, like Jonah, simply go where the fish takes you.

The first thing to say about this fish is that she is more obedient than the prophet. Think about it. God calls Jonah to go preach repentance to the city of Nineveh. While there is a time-honored tradition of people initially resisting a call from God (think Moses and Jeremiah), Jonah doesn’t even bother to bicker with the Almighty. He just heads straight to the travel agent and buys a one-way ticket to Tarshish. God is not amused, and that’s where the fish comes in. Her obedience to God’s call is a perfect foil for the disobedient prophet she rescues.

Until we recognize the fish as an agent of God’s grace, we will never glimpse what this book is about. Consider this. Jonah is happy to accept God’s grace in the form of the fish. He even writes a psalm about it while treading water in her digestive juices. But when God grants the city of Nineveh a reprieve, Jonah storms out of town and pitches a prophetic fit. He actually has the temerity to complain about God’s being “a gracious God and merciful, slow to anger, and abounding in steadfast love” (4:2). Never mind that these words are used over and over in the Bible as a confession of faith and a reason to celebrate. Jonah can’t stand it that God has been gracious to people he doesn’t like.

It would be easier to mock Jonah for his hypocrisy if we weren’t so full of it (hypocrisy, that is) ourselves. Eager to accept God’s grace when it is offered to us, how often do we resist the idea that God might also be gracious to those we don’t approve of?

For centuries, readers have obsessed about the “credibility quotient” of this story. We have argued about whether a grown man could really be swallowed by a fish and live to tell about it. We have speculated endlessly about whether it was a fish or a whale.

Perhaps it’s time to simply admit that the fish is a “red herring”—at least in the sense that such speculations distract us from the central truth of this story. At the end of the day, this is a story about a fish named Grace. And she is one of the Bible’s best “faithful foreigners.”

For the love of God is broader
than the measure of our mind;
and the heart of the eternal
is most wonderfully kind.

Pray: Forgive us when we assume it our right to begrudge your grace to others. Make us more grateful and more generous.