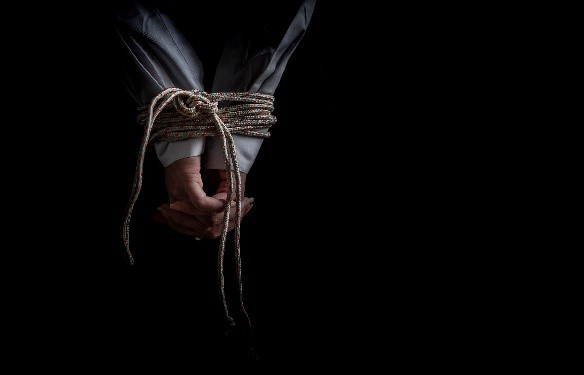 But he answered his father, “Listen! For all these years I have been working like a slave for you, and I have never disobeyed your command; yet you have never given me even a young goat so that I might celebrate with my friends (Luke 15:29, NRSV).

“Mom, Natalie hit me!” wailed the aggrieved voice from the family room.

The newspaper stirred slightly and the weary mother behind it sighed. Was it worth walking to the other room to referee? She hated getting caught in the middle of these things. Why couldn’t they work things out for themselves? Or better yet, not get into fights in the first place? She opted to stay where she was.

“Natalie, did you hit your brother?” she called.

“Did you hit your brother?”

Silence. The mother lowered the paper and listened until, at last, she heard the barely audible apology. “Good,” she thought, going back to her reading.

But before long, the aggrieved voice piped up once more. “Mom, I don’t think she meant it!”

Forgiving someone is much easier if we are sure that they are sorry. But more often than not, it’s hard to tell. Even if someone has said the words, we can never be sure it’s more than lip service.

The older brother in the story of the prodigal son is in a similar bind. Actually, he may have it even worse, since if we read the story carefully, he never actually hears his brother’s eloquent confession: “Father, I have sinned against heaven and before you; I am no longer worthy to be called your son” (Luke 15:21).

Put yourself in the elder brother’s shoes. “Junior” had convinced their father to cough up his half of the inheritance, and then disappeared to do goodness-knows-what. All that was certain was that he, the obedient older brother, had been working hard on his father’s farm. In fact, he’d been coming in from the field when he heard the sounds of a serious party coming from the house. Who was it for? Why hadn’t he been invited?

He’d had to ask one of the servants what was happening. As if that hadn’t been humiliating enough, the servant had announced the “good news”:  Junior was back, and Dad had fired up the barbecue pit and hired a band.

Commentators have criticized the older brother for his arrogant and unforgiving attitude. Yet, we often overlook the fact that he is being asked to forgive without any certain knowledge of his brother’s repentance. From his perspective, the prodigal brother seems to have just shown up, acting as if nothing is wrong. How would you feel?

Most of us would feel anger…perhaps even hate. What’s more, since those feelings had probably been simmering for some time, the welcome home party would likely bring them to a rolling boil.

In a perfect world, every act of forgiveness would be preceded by a sincere apology. But the world does not always work that way. Victims of rape, abuse, and injustice have to go on living with or without the repentance of those who have hurt them. Sometimes death steps in and precludes the possibility of repentance, and the living victims are left with nowhere to carry their rage. Is any alternative available in such situations, other than to let the rage and resentment build to a boiling point?

Jesus showed us a more excellent, though by no means easier, way. As he was dying on the cross, he prayed this prayer for us, his executioners: “Father, forgive them; for they do not know what they are doing” (Luke 23:34). Notice that his forgiveness is not contingent upon our realizing the scope of our crime or asking for our victim’s forgiveness. He simply forgives.

Colossians 3:13 counsels us to forgive “just as Christ has forgiven you.” True, it isn’t easy. But it is better than being held hostage by hate.

Ponder: What is the hardest thing about forgiving for you? About being forgiven?

Pray: Set us free from all the thoughts, emotions, and memories that hold us hostage, gracious God. Help us to forgive as we have been forgiven.