[God] has brought down the powerful from their thrones, and lifted up the lowly; he has filled the hungry with good things, and sent the rich away empty (Luke 1:52-53, NRSV).

Back before Netflix was even a flicker in anyone’s imagination, daytime television was devoted to what were called “soap operas.” (The name reflected the fact that most were sponsored by soap companies.) If you were home in the afternoon and lucky enough to have the leisure to watch TV, chances are you looked forward to the daily dose of melodrama provided by programs like As the World Turns.

In spite of its pretentious title, nothing earth-shattering every happened on As the World Turns. Or at least it didn’t until that day in November 1963 when Walter Cronkite’s voice broke into the broadcast to announce that John F. Kennedy had been shot. Since the soap opera was live—and the president, tragically, was not—there followed several awkward minutes of reality television. For those members of the cast that had overheard the news, it became a true test of their acting skills to stay in character. Eventually, the network mercifully decided that the show did not in fact have to go on, and they broke away to cover the news of the president’s assassination.

Sometimes reality has a way of interrupting our lives in ways that cannot be ignored.

Mary is having one of those moments in today’s passage from Luke. Or to be more precise, she is reflecting on such a moment. It had taken place just a few verses before when the angel Gabriel showed up at her door to ask her if she would consider being mother to the Messiah.

It’s clear that nothing will ever be the same for her personally. But what’s remarkable about the Magnificat is how little attention Mary pays to her own story. Even when she acknowledges that “from now on all generations will call me blessed,” she firmly redirects the focus to what God has done. And from the sounds of it, nothing is ever going to be the same for anybody.

There is both challenge and comfort in her outburst of praise. If you are rich and powerful, it’s hard not to read her words without feeling a frisson of fear. If you are hungry and oppressed, it’s the best news you’re likely to hear in your lifetime. But wherever you fall on the power spectrum, it’s clear that there’ll be some changes made.

Novelist George Eliot (Mary Ann Evans to her friends) once observed that most of us walk around “well-wadded in stupidity.” For many of us, the pandemic has intensified this sorry state. If we’re lucky enough not to be in the hospital or planning a funeral, many of us are caught living what feels like the same day over and over. We seek relief and escape in front of our screens. This isn’t wrong; in fact, it is often a blessing. But as we listen to the familiar words of the Magnificat this Christmas, let them be a reminder that God has interrupted our regularly scheduled program to bring us a special news bulletin: Jesus Christ is born. Whether we realize it or not, nothing will ever be the same again.

Ponder this paraphrase of Mary’s song. Ask yourself:  What difference is Jesus’ birth making in my life right now?

From the halls of power to the fortress tower, not a stone will be left on stone.

Let the king beware for your justice tears every tyrant from his throne.

The hungry poor shall weep no more, for the food they can never earn;

There are tables spread; every mouth be fed, for the world is about to turn.

My heart shall sing of the day you bring. Let the fires of your justice burn.

Wipe away all tears, for the dawn draws near, and the world is about to turn.

Listen to this recording of the Goshen College Chamber Choir singing Rory Cooney’s paraphrase of the Magnificat on a broadcast of A Prairie Home Companion in 2015. For the full text of the hymn, also known as the “Canticle of the Turning,” see this link or #100 in Glory to God: The Presbyterian Hymnal.

Pray: Break through whatever would keep me from a searing awareness of the significance of your birth, Lord Jesus. Then let that good news be reflected in my life and the life of your world.

Here is a short clip of the opening of the old soap opera, As the World Turns.

Here is November 22, 2013 article from the New York Times by Thomas Vinciguerra about the interrupted episode of As the World Turns. It’s called The Day the World Stopped Turning.

Introduction to the “God With Us” Series 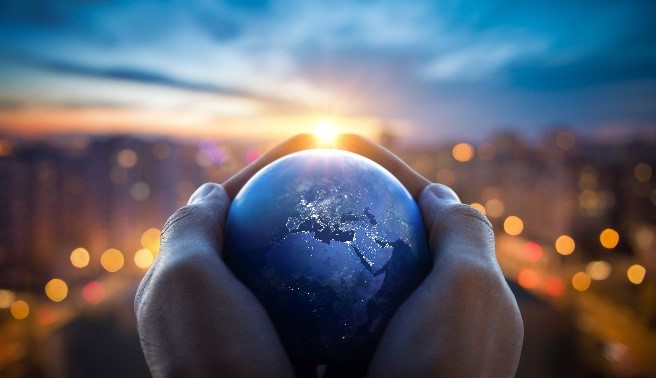 Emmanuel. It means “God with us.” If ever there was a time to pray for God to be with us, it’s now.

In this series, we let Advent and Christmas hymns lead us in that prayer. Since December is short and we need God with us now, we’re starting early. Besides, there are so many hymns and so little time! Some of the featured hymns will be familiar, and some deserve to be more familiar. But all of them offer unique insights into the miracle of the incarnation.

May these reflections help you feel God’s saving presence in your life and in the life of the world right now.