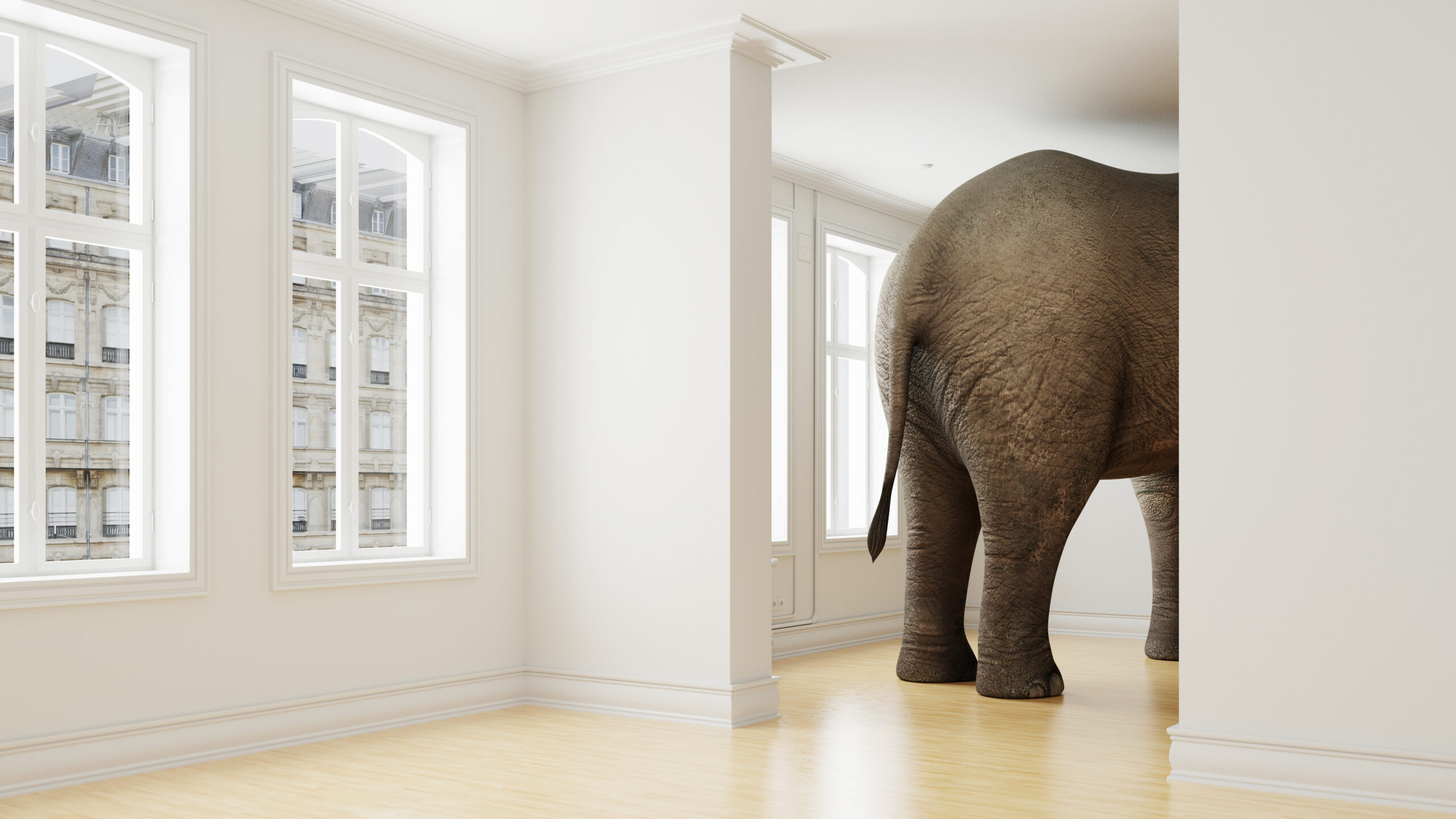 A week later his disciples were again in the house, and Thomas was with them. Although the doors were shut, Jesus came and stood among them and said, “Peace be with you.” (John 20:26, NRSV).

Jesus was not the only unexpected visitor that day. There was also an elephant in the room.

Of course, the Bible doesn’t mention the elephant, but it was there just the same. It must have materialized in the time between Jesus’ two post-resurrection appearances that are recorded in John 20:19-29. And it could not have been comfortable for the disciples.

It all started on a Sunday night. Jesus had been dead for over two days. The disciples (minus Thomas) were hiding in a house, wondering what to make of Peter’s report that Jesus’ tomb was empty. And Mary Magdalene had come back claiming to have actually seen Jesus alive. They must have wanted to believe it—but after all they’d been through, it hurt to get their hopes up.

By the time Thomas got back, Jesus was gone. (Enter the elephant.) The rest of the disciples were ecstatic. “We have seen the Lord!” they announced. Thomas must have thought they had lost their minds. So he said, “Unless I see the mark of the nails in his hands, and put my finger in the mark of the nails and my hand in his side, I will not believe” (v. 25).

The Bible doesn’t tell us what it was like for the disciples during the week that followed. All it tells us is that one week later, just as before, Jesus appeared again in their midst. Except this time, Thomas was there. And Jesus, who seemed to know that for Thomas, touching was believing, offered the doubting disciple his wounded hands and side.

There are some important lessons in this story for believers who find themselves at loggerheads with other believers.

Can you imagine all the arguments that must have taken place in the space of that week in between Jesus’ appearances? They weren’t petty arguments, either. The very heart of the faith was at stake. On the one side were the disciples who had seen with their own eyes that Jesus was alive again. On the other side was Thomas, refusing to budge, no matter how passionate or compelling their claims.

I have always thought that those of us who weren’t there should be grateful to Thomas for not “caving” right away. His doubts make it easier for us to believe, after all, since no one could ever accuse him of giving way to wishful thinking.

But beyond that, Christian communities in conflict can be thankful for this story as well. Here’s why.

I once heard a sermon on this passage by a preacher whose name I have, alas, forgotten. He talked about how important it was that Thomas was still welcome among the rest of the disciples in spite of his initial disbelief. And he said that the fact that they were still in community in this situation told us three very important things about the disciples who had seen and believed:

Christians disagree about many things. Sometimes the disagreements are petty; sometimes they are serious. Sometimes our fights flair into arguments that split denominations. Other times they simmer just beneath the surface, making everyone uncomfortable, and gradually sapping the body’s vitality. And sometimes they are just the awkward elephant in the room that everyone knows is there, but nobody wants to talk about. But whatever the level of hostility, every Christian community could do with a dose of the “three h’s” listed above.

Isn’t it interesting that Jesus repeats the words, “Peace be with you” three times in this story? Why? It’s hard to tell. But the fact that he does makes them sound less like a greeting and more like a command.

That command becomes even more meaningful when we remember that Jesus would have been speaking Aramaic. The Aramaic/Hebrew word for peace is shalom. While shalom is often translated “peace,” it means much more than that. Shalom is not simply the absence of conflict, but the presence of health and wholeness. Perhaps one of the reasons for Jesus’ post-resurrection appearances is so that he can say to us, Shalom be with you! That’s an order!

Does shalom mean there will never be disagreement in the Christian community? I doubt it. But it does suggest that there can be unity even when there is not uniformity. And it calls us—no, commands us—to pray and work toward a state of health where humility, hospitality and honesty hold sway.

Ponder: Think of specific situations where you disagree with another believer. Why is it so hard to be humble, hospitable, and honest? Why is it so urgent?

Pray: Teach us to be more humble, hospitable, and honest when we disagree. Come among us, and grant us your shalom.