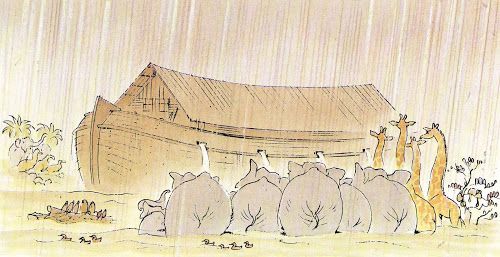 The LORD saw that the wickedness of humankind was great in the earth, and that every inclination of the thoughts of their hearts was only evil continually. And the LORD was sorry that he had made humankind on the earth, and it grieved him to his heart. So the LORD said, “I will blot out from the earth the human beings I have created—people together with animals and creeping things and birds of the air, for I am sorry that I have made them.” But Noah found favor in the sight of the LORD (Genesis 6:5-8 NRSV).

Why do we assume that the story of Noah’s ark is a children’s story?

My own young daughter had what can only be described as a full-fledged freak-out when we were “reading” Peter Spier’s artistic re-telling of the ark story. She was fine until we got to the picture of the water rising on the baby elephant as it stood beside its mother outside of the ark (see above). You’ve got to admit: this is one scary story.

One of my seminary students, Michelle Wegner, admitted that she might have to reconsider reading it to her own children. Here is what she wrote in the class discussion forum:  “The cute animals, rainbow, and ark would make a very cute children’s story if it weren’t for the horror of what was happening outside the ark. I’m all for cute animals and rainbows, but I realized this week that maybe this story should be treated with a bit more sacred sorrow and awe.”

Sacred sorrow seems to be exactly what the LORD is feeling at the prospect of wiping out almost all of the earth’s living, breathing inhabitants. The story’s description of God’s being “grieved to the heart” makes it clear that this decision is not made lightly. It is portrayed as a last resort to stem the exponential spread of sin. In human terms, our grieving God just wants a do-over.

I think I felt the full force of this story for the first time when I saw a production of Benjamin Britten’s Noye’s Fludde. The one-act opera started out innocently enough. The chorus of animals marched up the aisle two by two, starting with the smallest and working back to the biggest. The audience laughed indulgently as two tiny singers dressed as gnats began the procession. And yes—they were really cute.

But then I noticed what they were singing in their little gnat voices: Kyrie, Kyrie—Kyrie eleison. Lord, have mercy. The prayer grew louder and fuller as the whole creaturely chorus filed to the front of the sanctuary and took their places in the ark.

After some brief moments of comic relief (Noah’s wife was not keen to come aboard), the mood turned deadly serious as the sky turned dark. Thunder and lightning struck fear into everyone’s hearts. Then the passengers started to sway as the ark was borne up on the storm-tossed sea. As the creatures watched the towering waves, another prayer broke out. This time it was in the form of the hymn, “Eternal Father, Strong to Save”:

Eternal Father, strong to save,

whose arm does bind the restless wave,

who bids the mighty ocean deep

its own appointed limits keep;

O hear us when we cry to Thee

for those in peril on the sea.

Perhaps it was because the audience was invited to sing along at this point, but for whatever reason, that was the moment when I understood that we are—all of us—in a state of deadly peril. Creation is again threatened, this time by human neglect, ignorance, and greed. It is a moment for sacred sorrow and awe. It is a moment for repentance, work, and prayer. It is a moment that must grieve God to the very heart.

Ponder: Does God’s promise in Genesis 8:21 never to “again destroy every living creature” preclude our destroying ourselves?

Pray: Lord, have mercy. You are indeed strong to save. Show us how to survive the peril of this present moment.